Russia's "Headless Tanks" - Why Putin's Powerful Main Battle Tanks Are Getting Decapitated In The Ukraine War?

The Ukraine war has flooded social media with images and videos of Russian tanks lying destroyed, having been ambushed by Ukrainian armed forces equipped with anti-tank weapons. A key feature of these destroyed tanks is their turrets which are seen blown off clean and in some cases thrown far...

Russian tank turret, which landed on the 5th floor of the residential building in Mariupol​

That could make a pretty cool coffee table
Anyone have any idea what a Tank Turret might weigh?

Bubby said:
The drone footage of the Russians being targeted by a drone with rifle grenades is comical in a way. I was wondering what the bomb was but you have answered my question.
Click to expand...

I found some more information on those anti-tank grenades being dropped by Ukrainian mini-drones.
They are Russian RKG3 anti-tank grenades that are thrown at the tank. The standard one has a small parachute in the rear to ensure the shaped charge warhead hits the tank first.

The ingenuity of the Ukrainians was to remove the parachute portion and replace it with 3D-printed stabilizing fins to turn the grenade into a miniature armour-piercing bomb that costs less than $100, drop it from a $1000 drone and take out a battle tank that costs $10million... 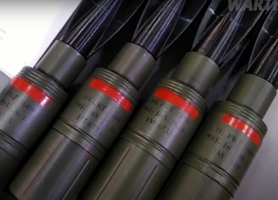 View attachment ру.mp4
You must log in or register to reply here.

I got treated to a Bioluminescent show