The (long) way down and a borrowed wheel spanner…

So after getting quotes to ship the bikes to Wellington I ‘wisely’ decided to rather buy a trailer and take them with me. The thinking was when I arrive I’ll sell it again and save some money. In the end this all worked out. Arrived last Sunday and trailer sold this morning :thumleft:

However, if I only tell that part of the story one could get the wrong impression. A lot more happened between the start and end.

Buying the trailer was easy, looked around and found one wide enough to fit three bikes in Rustenburg. A 40 minute drive and exchange of paperwork and some money and I was off. The owner assured me the tyres are new and they appeared to not have done any real mileage. The lights didn’t work but since I just bought the Jeep a week ago, I was sure the problem was not the trailer. Upon arriving home I checked the plug on the Jeep with a multimeter and confirmed, no power. Playing make belief auto electrician, I started checking fuses and wiggling relays to no avail. Eventually I found a wire that wasn’t properly seated in the fuse box, not knowing what it was for I figured it needs fixing and by some miracle now the trailer plug had power. Tested all lights and went to bed comfortable that I’ll pass roadworthy the next morning.

As planned, I hook the trailer at 6:30 for my 7:00 appointment. I’m still working so need to be home by 8:00. This is where Murphy struck his first blow. At the testing station there’s not a single light. I discover I had hooked the cable over the jockey wheel crank and the wires were pulled from the plug, probably when I pulled out the driveway. This is however not a problem, I have the trailer plug wiring diagram on my phone. Murphy struck his second blow. Whoever built the trailer decided to not follow any standard and I have to manually apply power to each wire to see which light it connects to. A little irritated I finally pass roadworthy and park the trailer at home ready for the trip to Cape Town. Paperwork was sorted by way of a runner that charges a small fee so all good.

For the next couple of weeks while we prepare for the move I keep saying to my wife that even though it might be wasted expenditure, I should probably replace the tyres. (Over the past week, she told me a few times to trust my gut in future.) I never got around to checking the tyres given our planned move date changed to 10 days earlier and our world was turned on it’s head.

The day of the move arrive and I load and secure the bikes. We’ll spend the night and MIL place so I figure I’ll see how things go and if needed, stop at the tyre shop first thing Saturday. We have some time since we’ll be spending Saturday evening an Nimo’s place in Colesberg. We planned it this way for the sake of the dogs and because I was planning on taking it slow with the heavily loaded trailer. That afternoon we leave Harties for Springs. I stop halfway and everything looks good. Tyres and bearings running cool and the trailor is well behaved.

Saturday morning we leave for Colesberg and enter the Freestate. What happened to the roads!? The lifted SWB Wrangler with oversized tyres towing a heavy trailer does not like the irregular surface. Before Kroonstad Lereze named it two-step. When the Jeep hits a bump it twitches making the trailer twitch which makes the Jeep twitch. This was not to be the kind of trip where I eat in the car while holding the sterring wheel with a knee. Both hands on the wheel and eyes on the road.

We stop every 200km for the dogs to visit the nearest hydrant and to refuel the Wrangler that has now dropped from the normal 7.5km/l to about 6. Everything looks and feels good and we arrive in Colesberg just before sunset. A quick dinner and early to bed.

We both wake up at 3:00 and decide we may as well leave early and arrive early. Roads are getting better and as we pass the halfway mark I begin to relax and settle into a rhythm with two-step and the trailer. Coffee at Three sisters shortly after sunrise and some quick calculations confirm the next and final stop is Laingsburg. We have lots of time so I’m keeping the speed below 100km/h and enjoy the relative calm of the drive. 52km past Beaufort West I feel a surge from behind and see bits of tyre flying in the rearview mirror.

This is an unwelcome development, after more than 1000km I started to think I was wrong and the tyres are fine. No problem though, I pull over and get to work only to realise that I must have left the cross wheel spanner on the shelve in the garage and it’s now on it’s way to Cape Town snuggly wrapped and packed courtesy of Elliott. After some deliberation I unhitch the trailer and send Lereze back to Beaufort. Meanwhile I freeze my butt off and struggle to appreciate the view. What makes it worse is that I pulled over right next to a series of grids on the N1 and with traffic picking up I have this constant grrr..grrrr…grrrr as background noise. 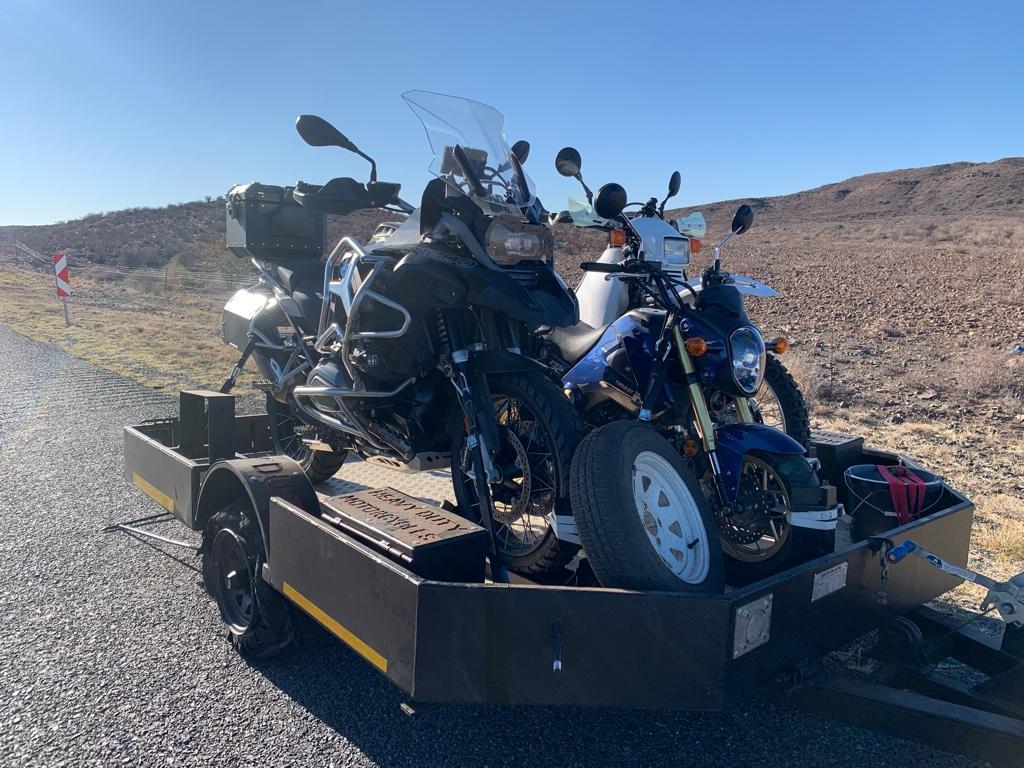 About an hour later Lereze arrives with a rusted cross wheel spanner out the boot of one of the petrol attendants in Beaufort. She gave him a R100 saying we’ll not be returning and he flashed a toothless smile when he saw the money. Changing the tyre is quick and soon we are on our way. I slow down to 80km/h thinking I’ll check tyre pressure in Leeuw Gamka and then have the spare replaced in Laingsburg. We make it all the way to about 30km from Laingsburg before the spare disintegrated. Murphy at it again!

A quick Google search and a couple of phone calls later we are having a picnic next to the N1. Help was on it’s way.

About an hour later the man arrives with two new tyres on the back of his mobile workshop/bakkie. I greet and approach to help but am greeted with: Boetman, jy moet maar wyd staan, ek is vrot van die COVID griep! I kept my distance and watched him fit two new tyres in no time. I did get an accusing sideways glance when he checked and confirmed the trailer’s tyres are more than 7 years old. Not ideal with a heavy load. It being Sunday I paid a hefty call out fee on top of the two tyres but we were sorted and off to Wellington.

The rest of the trip was without incident but I only relaxed when I stopped in front of our new temporary lodgings at the foot of Bainskloof.