Menu
Log in
Register
Install the app
You are using an out of date browser. It may not display this or other websites correctly.
You should upgrade or use an alternative browser.

As we all know there is not much to say on a all tar trip , but there is always a bit of a story to share of things leading up to hitting the road on the decided day .

My long time partner has has a wish to retire at the coast with an idea to see the sea , So in August she packed her car and headed down to Mosselbay , booked into a guest house and started looking for a house to buy , this took time but eventually she bought . Hoped that she could move in before xmas and that we could spend time in her new place , but things did not turn out that way .
I planned to go down by bike , and initially would do it in one hard butt ride , this was then seen as crazy and a two day ride with a pitstop was decided on , I was to leave home on the 22 nd and then with a early departure on the 23 be there mid morning .
I booked a room At the KARROO INN Middelburg a nice 700 k ride , left early on Friday and arrived in Mosselbay at 10 in the morning , a very bad accident on Potjiesberg pass , slowed me down , head-on , with 2 diseased , Arrived safe .

Product report
Some month ago i fitted a new rear tyre ( KENDA BIG BLOCK PAVER) did a ride to clarence with it and it seemed ok , then the weekend before I left I got caught in some rain and the tyre acted badly , it would loose traction under hard acceleration , spinning but not stepping out , concerned I wanted to fit another tyre . ended up not doing it as I just fitted a front for the same reason , thing it would not make the trip , here I on recommendation I fitted a MOTOZ TRACTIONATOR GPS . Heading into the mountain passes I was hesitant , rear tire with possible traction los , front more suited to dirt , I was pleasantly surprized , front tracked well and rear did not loose traction , confidence restored I pushed it down Montague pass , enjoying the corners , and being careful not the catch a pannier on the tar .

Motul bike cleaning products
I bought some helmet cleaner and a bottle of bug cleaner made by Motul , I have used the helmet/visor cleaner before , and like the product , it works well , I also bought some bug cleaner , ended not taking it with as I was worried the bottle could leak , used it on my return and the bugs just melted off, very impressed with it .
The night before I left I had a quick xmas dinner with my son , and he gave me some Motul sample bottles of helmet cleaner and a bike wash and wax . the WASH & WAX really impressed me , Yes I wash my bike on trips , and the wax was a bonus in making the bike shine , Will get the normal size one for future use .
last thing was a handle bar bag , here I could not find something that I liked in the time I had , and I was not sure how it would work . Last min idea , I had a small travel bag that I used when going to Mozambique to hide my cash in , I zip tied the bag to the bars , had a zip flap that could take my card , and have to admit it worked , so now I can restart the idea of finding a bag to fit the handlebar .
Chain lube is a must on any long ride , many option available , I took the SPANYAARD chain & linkage spray , it does fling off and make a mess , but the chain runs smooth . easy to clean off .

Back to the ride home , Again decided on a two day trip , halfway to Colesberg on the 1st and home on the 2nd , left Mosselbay at 10 in the morning , hot hot ride with temps over 30 degrees , butt taking strain, but figured if I sit on the rear seat ala weight back dirt style numb bum will get a rest , it worked and I could also duck a bit under the screen , 600 ks 5 hours . woke up at 2 am and decide to get up and go , now I know its not recommended to ride at night , but I thought why not try , I have a nice set of spots on the bike, making visibility ok .filled up and was on my way by 2.30 am , road was very quite and with the spots on could see well, traveling at just over 110 kph for a while and then slowly pushing up the pace , to my 140 kph cruising speed . Closing in on Bloemfontein I was comfortably doing 160

. and slowing down to the legal limit felt like I had the brakes on . I know .....
With very little traffic on the N1 i was home by 7 am .
I love the long rides , but have decided that visiting my partner in the future I will be flying down , 2 hours vs 2 days for about the same cost , is a way better idea and I will be spending more time with her .

Fuel consumption
On the trip down I filled up in Alberton , then in Venterburg , Trompsburg , Middelburg , Willowmore . used about R1500.00 average about 18kilos per litre
On the trip back I filled up in Heiderant , then in Willomore , Graafreinette , Colesberg , Bloemfontein , Ventersburg and got a low fuel warning coming down the hill at Bedfordview , have about 20 ks to empty . average 15 kilos per litre , but pace was high , so payed the price , 600 kilos in 4.5 hours . R2000.00 petrol used .

also rode that highway at night going to Bloem once on 1190 on an iron butt ride....great road to make up time.


handlebar bag...dont get the big bulky ones, I have both and this is a lot more practical, with small toolkit that can be bought as combo. Have it on my 1290. 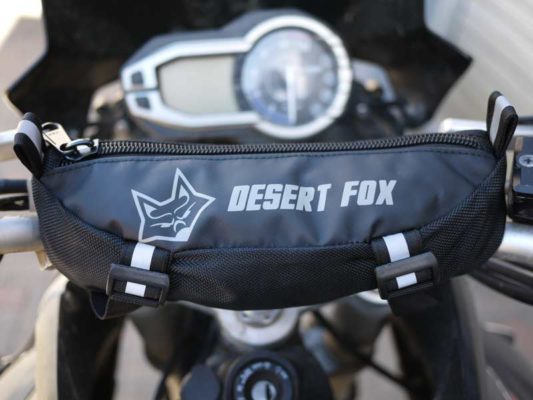 The Desert Fox EzPack handlebar bag is ideal for storing those items you need to access easily and quickly on your bike such as keys, wallets, cell phones, ear plugs and small cameras. Inside the bag, you will also find an additional zipped mesh compartment allowing for items to be separated...

I must get some bug off and try it as I have always just washed my visor with the window washer at the garages or wetwipes next to the road!
Safety wise, how did you find the night riding?

I have to admit , I LIKED IT . roads were not busy , and if it was to be a regular thing then maybe a extra set of lights mounted lower with the left one set outward to light up the side of the road , I think that will be a win . Mountain passes at night mite be more challenging . but the N1 was easy peasy
You must log in or register to reply here.

An abandoned railway bridge, and time on my hands.
2